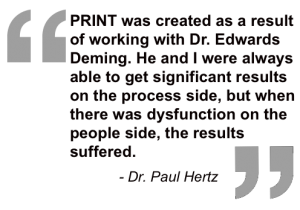 The Why of You powered by PRINT®

Originally created by The Paul Hertz Group, PRINT® uses a combination of customized reports, humor-infused workshops and team/individual coaching to reveal the unconscious motivations that drive a person’s behavior and actions, and gives insights into the “Why of You”.

Instead of only describing observable behaviors or preferences (as is the case with conventional assessments), PRINT addresses the root cause of persistent issues by uncovering changes needed for sustainable improvement, growth and change.

During the last three decades, PRINT’s prescriptive approach has solved mysteries that plague organizations in hundreds of different industries.

Examples of documented PRINT impact include: